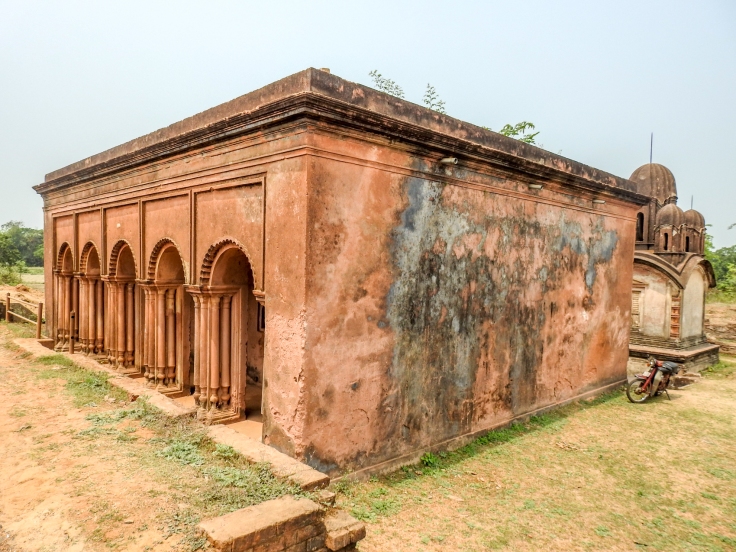 After visiting ‘Nabaratna temple’ and the adjusten ‘Shiva Mandirs’ (shiv temples), now we come in the opposite side, the opposite side of the Moram Street, there is a the flat roofed building (erection ) of  ‘Kalachand’ . The current position of the building is beneath the dam street and the roof of the building is now parallel with the street. This building was made in the Majumder Zamindar (land lord)’s period. There are three rooms in this building. The owner of  the Eastern room was God Laxmi Zanardan and the Western room was of Kalachand Thakur. The middle room was to connect the others and to store necessary things of worship. The truth, as far as I know, Sri Sri Lakshmi Jnardan is same as Basudev Bigraha. Kalachand Bigraha is worshiped as Sri Sri Radha Kalachand in many places.  At the same time, both of them are true and the one, the absolute Bramha, that is, the truth of the Anthony Sahev – “Sudhu namer fere, manush fere, eo kotha shuni nai.” (Only the names creates difference between the men, and also have not heard of anywhere.)

In this temple, there was no terracotta or stack work. “Thakurghar”(the room of God) is now locked. The statue of Lakshmi Janardhan was taken by one of Majumdar dynasty, Jitram Majumdar and settled at the other side of the Kansabati river in the village of Dhakia Bazar. Now the place is called Bedr Jardanpur. The statue of Kalachand is being to the present descendants of Majumder family in Bera Baridhpur of Midnapur. (It is found in the writting of Sri Somen Sengupta). 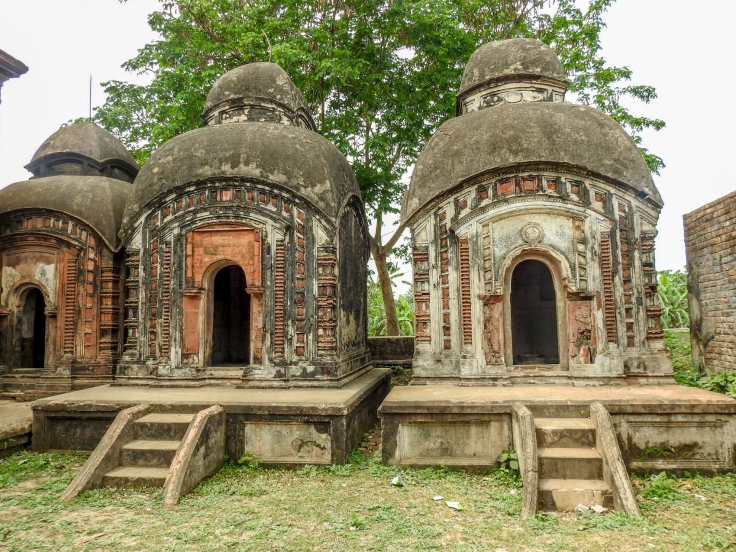 On the back and the west of the Kalanchand’s building , there are three octagonal Shiva temples, and I can see a broken building and a temple of ‘Panchkarna’. The three Shiva temples are situated closely on the high base or foundation. Standing to the right side of the temple, on the right hand side of the last Shiva temple, there was written “Shuvamastu Sukabad 1771, San 1257 years”. There are still some small terracotta works on the walls of the pillars of Shiva temple are visible. There are two damaged statues of Dwarpal on each side of the temple’s portal . The temple has a pillar, which has a beautiful work of ‘Pankha’ on it. 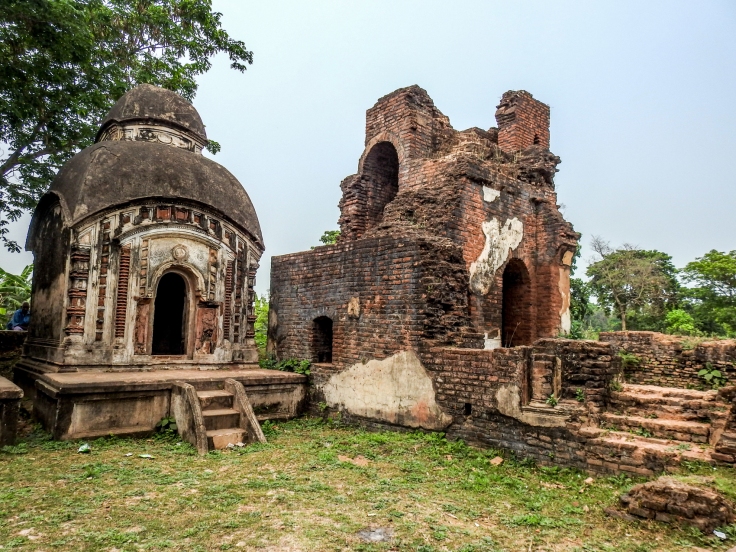 Thereafter, there was a large broken two storied house, may be which was part of the Thakur’s building. Just right in front of the Shiva temples, there is the ‘Panchashiv’ Temple built in the ‘Pancharatna’ style, which was established on another high foundation. According to information received from Iyasin da (brother), this temple is 14 feet in length and width, and 30 feet in height. The temple is marked by a platelet hole, which is half open and half closed, windows and doors, standing between the blinds stretched the door like a ‘Antapurbasini’ (one who never come out of the house).

5) Next weekend you can be on Pathra, Somen Sengupta,

Extinct Ritual of Bengal: The Miniver of Menarche

Written by Tirupati Chakraborty Transcreated in English by Gautam Guha Ritual Terracotta pot-cover discs are an integral element in the...

Written by Dr. Tilak Purkayastha Transcreated in English by Sunita Jash Let's come to Durgapur with me in search of a Dacoit-Kali temple...

Written by Indrani Sen Transcreated in English by Arnab Chatterjee In an age when befriending and unfriending is just a matter of a few...